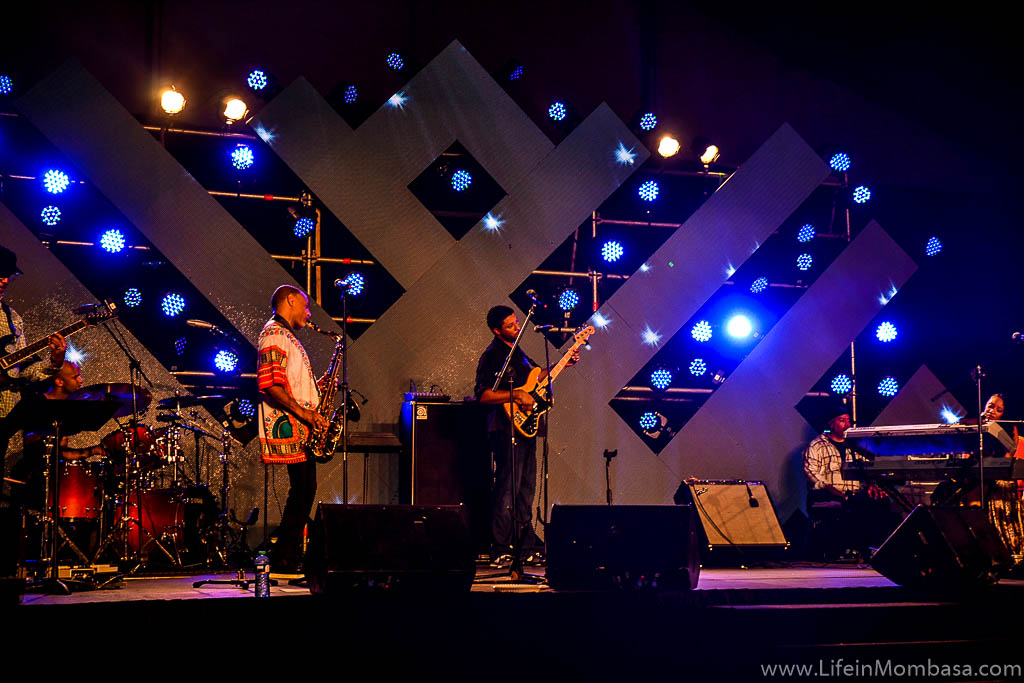 The wind whistled slowly as the night crept in, the heat engulfed the air it was bound to be a beautiful night. The crowds started streaming in flocking the grounds at Butterfly pavilion for the Safaricom Jazz. The  Gates opened at 6:30 in the evening and cars were directed to designated parking areas, while others were taken to the venue by various buses.

The decor at the dome was impeccably done, with the seating area, draped in white and the dome well lit, setting the mood for a lovely night of jazz. Everyone was seated by 8pm eagerly waiting for the show to start.  With various vendors set up at nearby tents selling food and drinks, as well as other vendors selling African artifacts, there were enough activities to indulge in before the show started. We all love photos, and Safaricom definitely knew this, by providing a photo booth, where all in attendance got a chance to look glam while having their photos taken!

The crowd was ready for a soulful night, the ladies all dressed and the gents looking dashing as ever, this was not your everyday music concert. Finally at around 9:30pm, Edward Perseen and the Different Faces band gave a spectacular performance, including a special rendition of jazz with a Coastal feel to it, that got the whole crowd dancing and ready for the main show! They are definitely a force to reckon with, when it comes to the jazz scene in Kenya.

Kirk Whalum graced the stage with passion and fire, and his soulful performance made you reconnect with your spirit. In his first piece he started off with the Gospel according to Jazz from Chapter 1 to 5, that left everyone in the crowd in awe. His energy resonated in every song he played, as they shared the stage with Gerald Albright and Norman Brown. Many people among the crowd, weren’t familiar with Shelea Fraizer’s music, but she captivated everyone with her sultry voice and skills on the piano; she’s an upcoming artist that we should definitely look out for in the scene.

Norman Brown was the highlight of the event, his infusion of and contemporary jazz left the audience satisfied  with every succulent inflected note. The crowd moved to his beats, creating a wave of bliss and emotions that swept over the entire audience. He has a way with the guitar and it was evident when he showed off his skills while strumming the guitar behind his back as the crowd looked on in amazement!

Finally, Gerald Albright  came on stage, the crowd still excited and yearning for more jazz tunes. Gerald Albright has this soulful way of making everyone in the crowd, transfixed to his performance; his emotions while playing the saxophone, leaves you in a daze and it’s no wonder that when it comes to jazz, he definitely is a maestro!

The Jazz  Festival was truly a breath of fresh air in Mombasa, a few lucky winners among the crowd were fortunate enough to win phones and airtime thanks to Safaricom. The jazz enthusiast and CEO of Safaricom, Bob Collymore has definitely paved the way and set high standards for  jazz festivals in Nairobi and Mombasa. Safaricom outdid themselves with a well organized concert; from the decor, security, sound and not to mention the entertainment from the jazz maestros, that culminated the year well. Mombasa looks forward to many more concerts, and probably jazz musicians gracing us for the next Safaricom Jazz Festival!

This what others had to say about the event :

This was my first time attending the Safaricom Jazz event. I didn’t know most of the performers so I was a little skeptical of going but I knew that we don’t get the pleasure of having concerts like this in Mombasa all the time so I decided to go and check it out. First of all, the security was good and there is nothing as awesome as feeling secure during times like this when terror is everywhere. I loved the organization of the event since everything was moving swiftly and the dome itself was well decorated and organized.

I loved the caliber of people that turned up and their energy. The artists were engaging with the audience and playing familiar music every once in a while. It was truly an awesome experience ,swaying to the sound of the instruments, laughing at the jokes and being in awe of the amazing voices. The artists left us wanting more by the time the event came to a close end.

On areas of improvement, this being Mombasa a dome sometimes is too confining which makes it too hot. Unless you go ahead and install fans as well, I think an open air concert is much better and more comfortable. Other than that this is an event I will definitely attend come next year’s version.

The thing I liked most about the event was the ambiance. The crowd was great and appreciative. Everyone was on their feet and there wasn’t one dull moment. The musicians were on point. It is worth noting too that the event organizers were very organised, with transport to carry attendees to and from the parking.

All in all, it was a memorable event.